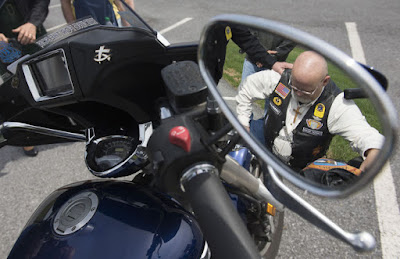 MONROVIA — Parishioners rolled up to Bush Creek Church of the Brethren last Sunday on Harleys and Yamahas. The church partnered with the Frederick Chapter of the Christian Motorcyclists Association to conduct worship and a blessing of the bikes. After the service, attendees headed outside and circled each motorcycles one by one. Many in the group placed their hands on the bikes. All bowed their heads. Someone in the CMA leadership then offered a prayer over the rider and his or her motorcycle. In the back corner of the lot, Frederick CMA founder Norman Tyler wrapped his arms around Kristofer and Crystal Herbert. He asked God to watch over the young couple and keep them safe in their travels. He prayed for the mechanics who work on their Yamaha R6 to be able to keep it operating properly. He prayed that they would be able to avoid any obstacles in their path. And he asked for God’s protection even when they are not riding — that their marriage will be strong and they’ll be guided to make good decisions together.
Kristofer grew up riding dirt bikes and motorcycles but Sunday was the first time he ever had one blessed. He figured asking for divine protection made sense since he spends a lot of time on the R6. He rides to work each day unless it is raining. And nearly every weekend, the couple heads out together just for fun. Although this year, they anticipate that they’ll spend less time joyriding. The couple is expecting their first child in August. Crystal also has a motorcycle license and said they intend to teach their child to ride. She attends Bush Creek regularly and was eager to experience fellowship with the CMA.
The Frederick chapter travels around the county offering prayers at any church or organization that expresses interest, said Terry Reese, CMA members. “We are non-denominational.” The group also partners with businesses. The previous week, CMA members gathered in front of the Frederick Harley-Davidson dealership to pray with riders, he said. Blessings aren’t limited to motorcycles either. “As long as it has a motor, anything can be a part,” Reese said. They’ve blessed dirt bikes and even ATVs. Typically, the blessings are done in early spring at the start of riding season.
Sunday’s blessing was the first for Bush Creek but CMA members attended the church once before last fall. At that time, only the pastors and a handful of parishioners knew they were coming. The CMA group dressed up to look as frightful as possible. They wore ripped jeans and black leather coats. Several guys wore long shaggy wigs, Tyler said. Partway through the Rev. Leo Barnes’ sermon, Rod Fry of the CMA stood up and interrupted him. Fry walked to the front of the room and began to speak. Several parishioners glanced back and forth at each other. “They wanted to escort me out,” Fry laughed. He serves as chaplain for the Frederick CMA chapter and said Barnes was in on the act. As Fry spoke, he began taking off his rough clothes and long wig. Underneath, he was nicely dressed and clean shaven.
The intent was to show that we “can’t judge anybody by their book cover,” said Barbara Tyler, co-founder of the Frederick chapter. No one can know another person’s heart. And everyone deserves a chance to hear God’s message no matter how he might look. The name for the Frederick chapter is Won By One, because they focus on individuals, she said.
It is up to those who have already accepted Christ as their savior to help others find their way back to God, Fry said. He offered the sermon Sunday, asking those in attendance, “If you truly believe, what are you going to do about it?”
Association members try to answer that question in everything they do, Barbara Tyler said. They view their group not as a club but as a ministry. “We ride, yes. But we ride to open doors,” she said. Offering blessings is just one of many activities in which the group participates. Members help at local soup kitchens, share their message at various biker events and raise funds to help missionaries and pastors around the globe. At Sunday’s service, they showed a short film highlighting some of the volunteer efforts the global association undertakes each year.
“It’s just exciting to hear what CMA is doing,” said the Rev. Melissa Barnes. Bush Creek already has a missionary focus and the CMA’s message reinforces that helping others is what the Lord is about, she said. Sunday’s service included several songs sung by the church’s choir and the congregation. Leo Barnes conducted and led several prayers and the call to worship. Debbie Reese of the CMA assisted her 9-year-old daughter, Kianna, and another elementary-age child in reading scriptures from the book of Matthew in the Bible. Before and after worship, CMA members and Bush Creek parishioners mingled, laughing and talking and sharing messages about God’s love.

Nancy Hernandez is a former staff writer for The Frederick News-Post. She writes once a month about her experiences visiting denominations in Frederick County in “From the Pew.” Suggestions welcome atreligion@newspost.com. 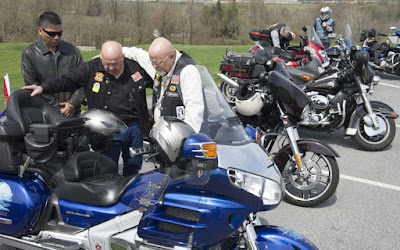 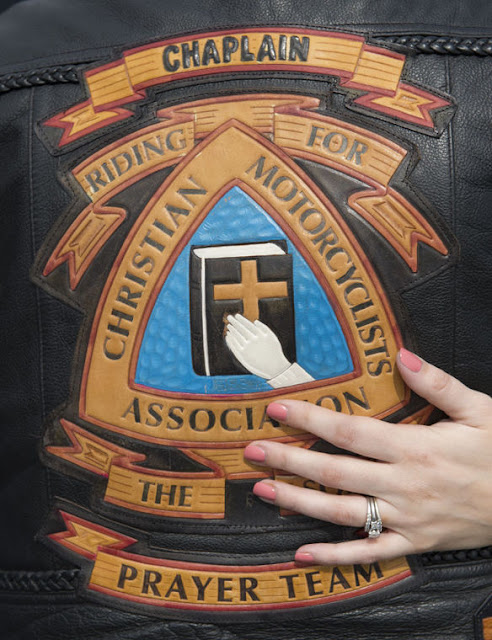 Posted by Circuit Rider at 9:21 AM